We’ve sent some postcards out to various players – let us know if you got one, take a fun photo (ideally in your team’s kit!) and we will add it to this page. Best photo gets a HUGE prize*

Postcard 1: Bommie from Get Horizontal was the first to send us a photo of his postcard and as such part of the reason we are running this little competition – big respect Bommie!

Postcard 2: Alan Murray, an Irish player living in Sydney who is travelling home just for this tournament , sent us this beaut! He’s all kitted out in his DUFF gear – a Sydney based Ultimate crew. He’s also upside down, obviously.

Postcard 3: David Pryce, a co-founder of the excellent The ShowGame site, and a player with both Fire of London and  the Royal Goaltimate Society sent us this effort from over in the English capital, London. 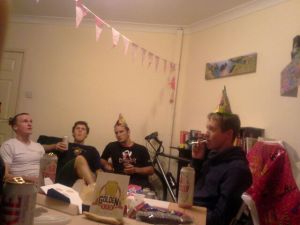 Postcard 4: An average evening in the Binge Dublin HQ with some partying, relaxed cans and standard staring into the middle distance. They assured us that this is just effort #1, with a more team-involved effort on the way from Ballybinge, where their hearts are. Ps Bingefest. 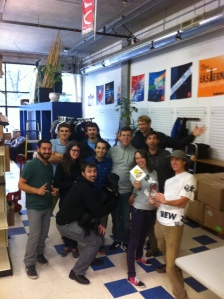 Postcard 5: This fantastic group effort comes courtesy of the Five Ultimate crew in their office in Seattle. We are really excited to be working with them on merchandise for the tournament. Also, they managed to be the fifth entry – well played! 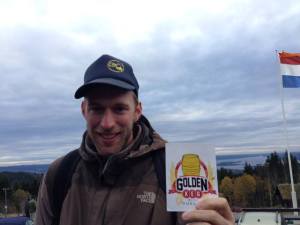 Postcard 7: Anyone who’s been to a Five Ultimate tournament in Europe has met, partied with and enjoyed the company of Christina Williams. She’s also beautiful and talented – it even says so on the Golden Keg postcard!! Any she’s addicted to craft beers, thus those glasses.

Postcard 7: An entry from the Assistant TD, Darron. And a pretty damn good one too. This is him sitting on the throne of Norse king Ragnar from the TV series Vikings. Don’t know it? Go watch it and then think what the Danes coming to Dublin in July will be like!! 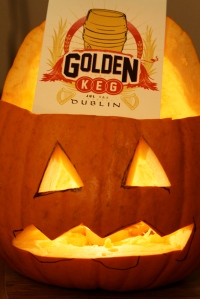 Postcard 8: A seasonal entry from a pumpkin called Paul. It is unclear whether he will survive until July. [Note: Paul succumbed to fungus and is destined to live out the rest of his days in a compost of some variety. He won’t be at Golden Keg 2014]

Postcard 9: Princess Layout are a team that has been an old favourite of Dublin tournaments. Lead by Iceni women and any men they could get their hands on, this team of bright pink and baby blue partyers mean business. You’ll find them on the dancefloor or at the bar! 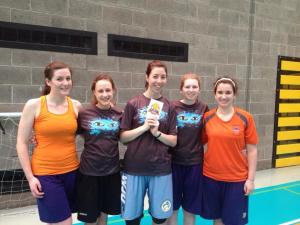 Postcard 10: One postcard but two fun pictures. Jabba the Huck, we like your style. These folk are the current All-Ireland Mixed champions and know how to have a fun time too. Renowned for their cake baking abilities and in-team love, they’re a fun crew! 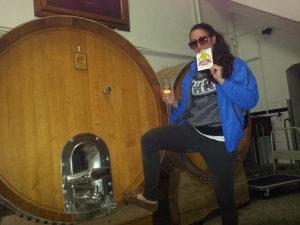 Postcard 11: Alex Benedict hails from Canada. She’s played on some of the top teams at all levels – club, beach, international. She also likes to drink boys under the table. Trust us. This is her with her postcard in a win cellar rocking a sweet jumper.

Postcard 12: What could have been. The stadium rocked for 81mins and then the All Blacks broke Irish hearts worldwide with the last play of the game. Our TD Marko and his mates were their to witness it first hand. He’s still upset. Maybe next time Kiwis, maybe next time…

Postcard 13: They say 13 is an unlucky number. Not for this young gent. That beard, that hat and that smile… Not to mention the fact he’s climbed a mountain at dawn (presumably)… Adam’s is right up there with our favourite entries. Well player sir, well played.

* The prize may well be a second postcard